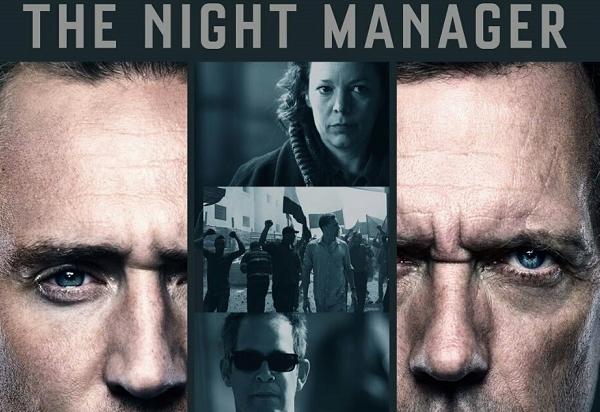 The British Broadcasting Corporation and novelist John Le Carré go way, way back. In 1979, we saw the classic TV adaptation of Tinker Tailor Soldier Spy, which cast Alec Guinness as aloof manipulator George Smiley. It was so good that even Guinness himself couldn’t top it with Eighties follow-up Smiley’s People. You would have needed cajones made of brass to mount a production as ambitious again. Well, it has taken nearly 40 years but the Beeb have finally done it with The Night Manager.

Leading Brit of the moment Tom Hiddleston shares top billing as Jonathan Pine, a smooth-talking functionary at an Egyptian hotel, who is entrusted at random with a secret document by a female guest. When he passes the information onto a pal at the British Embassy the guest winds up brutally murdered and Pine is recruited by intelligence honcho Angela Burr (Olivia Colman). The undercover operation puts him on a collision course with the subject of the document – businessman turned arms dealer Richard Roper (Hiddleston’s co-star Hugh Laurie). Pine is Roper’s nemesis, though the target is totally unaware… or is he?

One of the great appeals of Le Carré is how he’s acted as an antidote to James Bond (he once described the character as a “neo-fascist gangster”). His heroes aren’t usually heroes. They skulk about concrete structures with coffee breath rather than drinking Martinis in tropical locations. The trick screenwriter David Farr and director Susanne Bier pull off is bringing a Bond-style sensibility to the table. Colman’s scheme to nail Laurie is textbook Le Carré, but the presence of Hiddleston and an arch villain with an opulent, gun ‘n girl-festooned lifestyle is pure Ian Fleming. They’ve managed to meld two sides of the coin and it’s worked to towering effect.

Above all the miniseries drips with coronary-inducing tension from episode to episode. The opener is so gripping you wonder how they’re going to maintain the atmosphere for another five hours, yet somehow they do it with the pace rarely slacking. Pine’s training in Cornwall is a bit vague. He’s despatched to the West Country to pose as a drug dealer in order to create a dark past for Roper to uncover, but it’s a necessary step to portray Hiddleston’s path back to violence. Pine was ex-military before he entered the hotel trade and while the star is less convincing as an action man he certainly has the physique to pulverize his opponents.

Hiddleston is a prettified version of the novel’s protagonist. However this gives him a vulnerability that works with the character and also indicates a great career in hospitality should the acting work ever dry up. Laurie delivers a masterclass in reptilian malevolence as Roper, and a juicy role facing 007 surely beckons. Burr’s role is similarly altered to that of a stressed and pregnant battleaxe. This route seems odd, but of course you should never underestimate Colman, just as you can’t pigeonhole Burr. Everyone does a decent job but from the supporting cast Tom Hollander stands out (he has to, he’s much shorter than everyone else) as Corky, Roper’s preening lieutenant. Hollander has played nasties before (in Joe Wright’s Hanna for example) but this is something else and the actor is frequently in danger of stealing scenes.

Special mention should go to titles designer Patrick Clair and his team at Elastic/Antibody, who have realized another stunning opening sequence. Showcasing various items of decadence that morph into deadly armaments, it’s effortlessly cool and sinister. Further proof that Clair is the master of bringing the cinematic to the small screen.

The show was introduced as a blockbuster, and they weren’t kidding. However The Night Manager is worth noting as a saga that’s packed with content, making it a rarity in the bloated arena of today’s television. It’s a lean, mean, intoxicating six-parter that leaves you fit to bursting but entirely satisfied by the final bang.

This review appeared on The Hollywood News.