Out to own is Jungle, the knuckle-gnawing true story of adventurer Yossi Ghinsberg. Ghinsberg was stranded in the heart of the Amazon rainforest, where he faced a terrifying ordeal battling the elements for his very survival.

Daniel Radcliffe plays Yossi in the movie, which is directed by Wolf Creek‘s Greg McLean. We sat down for a chat about raging rapids, rugged Radcliffes and the inhospitable climes of Wolf Creek Season 2…

THN: The film is something of a departure for you. What drew you to the project?

Greg McLean: I wanted to make a movie where people were trying to save a life rather than take it. (Laughs) A lot of my films have been horror films. I thought the true story was incredible, it was very inspiring. When I first read it I thought what these guys did and how it happened was very moving and it was something worth trying to capture on film and share it with audiences.

What involvement did Yossi Ghinsberg have with the production?

He was very involved. He came down to Colombia and Australia where we shot it and was there the whole time. We spent the day together at first, getting to know each other and talking through everything in great detail. Then we went through the script line by line with me saying “Okay this is what the script says. What actually happened?” Just so I knew that going into the film I was completely armed with everything I could possibly get to give us the reality. Then often I would change things, back to his book. Because the book is a virtual telling of the story, obviously from Yossi’s point of view. But it’s a very clear telling of what went down. I was trying to be as accurate as I could.

How did Daniel Radcliffe come to be cast?

Someone mentioned Daniel and we looked at the movies he’d been doing. He’d been giving some fantastic performances and was seeking out different roles. He loved the character and what the movie presented as an acting challenge. He’s someone who’s looking for challenging projects and this was one! 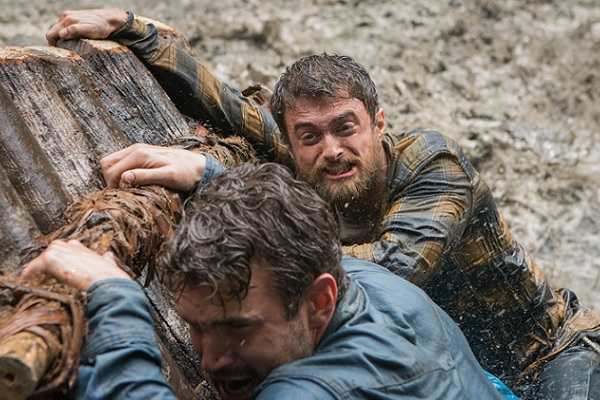 What scenes were the most difficult to film?

The scene with the guys stuck on the rock and then going down the rapids was pretty massive. It was really dangerous, we didn’t have a green screen. We were clinging to a rock in a raging river, I was just very, very anxious about that. Because if you fell in that water you wouldn’t be coming out. I didn’t want to lose actors in that river or I’d’ve been in trouble! (Laughs) That was hard work. It was necessary to make it feel as real as we could, short of chucking them in the water and seeing if they survived or not.

How long did you have to spend in the jungle each day?

The sun would come up, then we’d work all day till it went down. We’d rehearse then drive up to the mountains, to these villages around Bogotá (Colombian capital). It was a three hour bus drive along these tiny little roads. We’d get up before dawn and go out to these remote locations. It was fairly crazy! Pretty rugged.

If you were shooting there again, is there anything you would do differently?

No, we were pretty lucky with our cast and crew, they were all incredible troupers, throwing themselves into everything. For such a complex, challenging shoot I think we did pretty damned well to get out of it all alive with no casualties. The opportunity for danger was around us all the time, especially with the rafting sequence.

Your movies are generally set in inhospitable environments. Will you ever make something set in, say, a coffee shop?

I really want to! My goal is to make a movie set in like a Downton Abbey-style location. That would be my dream. (Laughs) I do love being outdoors and using the elements to tell stories but I certainly am drawn to telling other stories as well. So maybe my next picture could be a remake of Howard’s End or something.

I could throw in some zombies to beef it up a bit.

Indeed! Crucially, what did Yossi and the guys make of the finished product?

Yossi and Kevin saw it and loved it. They thought that the portrayal of them was really accurate. I think they were impressed with it. My intention was to tell their story as truthfully as I knew how to. What those guys went through was pretty amazing and I think they were happy with the result.

What was it like working with James Gunn on The Belko Experiment, which was a long-gestating project?

That was a script he wrote many years ago when he was first starting out. Everyone loved it but they were too scared of it. He was called about it later on but was busy doing Guardians Of The Galaxy Vol.2 so he went out to look for a director. I pitched to him and he really loved it. He’s a great collaborator. He’s basically a film fanatic, which I am as well. I think being a director himself he was cool in terms of what that role needs. If you gel with someone you kind of just leave them alone. You help them but ultimately you let them make the movie.

I’d like to move on briefly to talk about Wolf Creek. What can you tell us about Season 2?

It’s a completely new storyline from scratch. It starts a bigger story arc that may continue if we go into a new season. The basic concept is about an international tours coach in the Outback. They encounter Mick Taylor and all sorts of craziness happens from there! It’s a character-based thriller and incredibly fun.

Mick Taylor is a well-developed character, which you’ve expanded from movies into TV and also books. What is the secret behind his longevity?

There’s the true crime element… a lot of it is drawn from true life cases. His psychology is fairly accurate to real serial killers from Australia. Also I feel people are fascinated by the nature of evil and he is a purely evil character. We’re drawn to try and understand that. Plus he’s a character audiences love to hate!

This interview appeared on THN.